skip to main | skip to sidebar

The start to this year has been one of the rainiest and most drab ones I can ever remember. I hate to complain about the rain because I know we will be praying for rain later on, but goodness!  With all of the rain, we discovered a leak in the roof, and finding someone to work on it is proving to be quite difficult. When we bought this house in 1993, we thought the shingles were slate, but sometime around 2000 or so, we had to have the outside repainted. The guy who was doing that told us we needed to replace some of the fascia board. He gave us the name of someone so we called him. He told us that he found some cracks in some shingles that needed repairing. We were then told that the shingles contain asbestos. In order to replace them, we would have had to have a hazardous waste permit, and we would have to pay a disposal fee...by the pound. These shingles ain't light. So replacing them was out of the question. We found a man from Decatur (I think) who worked on this kind of roof, so we had him come do the work.  And now we have this leak, but we cannot find anyone who works on anything other than "regular" shingles. Actually, that's not true. John found a company who is going to come look at it, but they've never gotten in touch with us, and John has stayed so busy he hasn't had time to call them back. Joys of owning an older home!

Today has been a really nice day.  It has been warm enough to sit outside (where I am now), and the sun has popped in an out. Even when it's been in it's been sunnier than it has been in a while.  I am so ready for warmer weather and sunny days!  The only drawback is the pollen.  When I went to get my shot Thursday, the pollen count for some of the trees was 10.2, and that's not good for allergy sufferers.

Speaking of allergies...mine have given me FITS all winter.  I cannot tell you the last day I didn't have sniffles or congestion or watery eyes or sneezing. I would give almost anything for one week of absolutely no allergy issues.

John has done beautifully since his stroke. He has no lingering problems at at, and for that, I am so very thankful!  God is so good!!!!  We're working on getting his blood sugar stabilized.  He's been back on his pump, so his numbers have been much better. He was due for an upgrade, and it came in yesterday. And that's a good thing because his old one messed up. Again.  We're also working on getting his blood pressure lower. It isn't extremely high, but because he is a diabetic, they want to see it a little lower. We've started trying to eat healthier foods, and we haven't gone out to eat nearly as much. (That's good for the wallet!  Hahaha). I've actually found a couple of "real" recipes that I've made...and they've been GOOD!  Anyone who knows me knows I don't LOVE cooking. 😜 But you do those things you don't LOVE for those who you LOVE. 😊

School is winding down. Two weeks until spring break, and then only eight more after that.  And the. I can retire (fingers crossed!) in four more years!!!!  Woo hoo!

What about a metal roof, that way it could just go on over those shingles and they wouldn't have to be taken off? We need a new roof bad! No leaks inside (Knock on wood) but you can tell by looking at our roof, they look bad ... we are wanting to put on a metal roof.

Have you thought about replacing the roof with a tin roof? The sound of rain on one is amazing. They are going to eventually replace the parsonage with one. I hope we are still there to enjoy it.

I love my Crimson Tide!

I really, REALLY mean this...

Thanks for stopping by!

Leavin' it all behind... 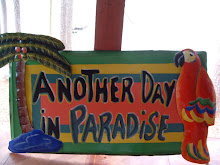 Trina
I'm a small-town country gal who loves God, my family, and my friends. My husband is my best friend, and I can't imagine my life without him. We have 2 daughters, 2 sons-in-law, 2 grandsons, and a gender-unknown on the way. My "babies" are my rat terriers, Ali & Bama. :) I teach 11th and 12th grade English. I love my job and my kids, but retirement is getting closer and looking so sweet. I have some of the best friends anyone could hope to have. I love hanging out over a cup of coffee and talking. My life is filled with so many blessings, and I thank God every day for each and every one of them.

Karen is such a dear friend!!

A Blessed Mom of 6

Blogs I Love to Read

Posts from the Past